Vote411 is the League online voter guide for Wyoming races.

Forums and Other Voter Services 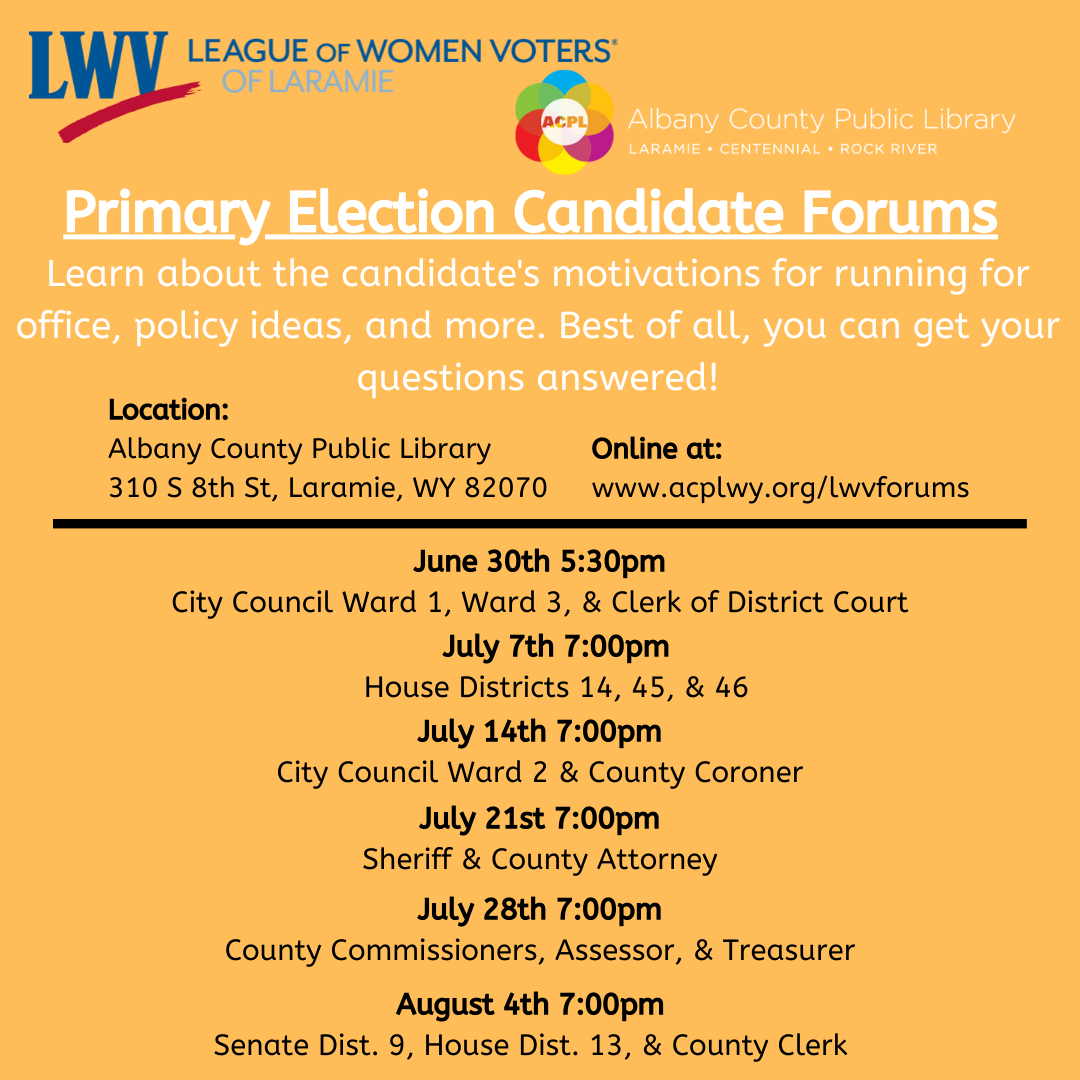 The Budget Session concluded Friday, March 11. The League of Women Voters of Wyoming was pleased to share weekly updates with members and voters across the state. The Legislature regularly convenes in a Budget Session beginning on the second Monday of February, which typically lasts 20 legislative days. Except for the budget bill, all other bills require a two-thirds vote from the Senate or House for introduction during a Budget Session. Learn more from wyoleg.gov.

Our Voter Guide for the General Election in Laramie, Albany County, and state-wide and federal offices is now available on this link, and will appear in print in the October 11th issue of the Laramie Boomerang. See also the publication Choosing a Candidate in Wyoming, and the LWVUS website Vote411.org for additional voter and candidate information.

Our Voter Guide for the General Election in Fremont County and state-wide and federal offices is now available on this link, and was also mailed to all households.

Candidate forums for the General Election were held in September and October of 2020, and recordings are linked below, and found on the YouTube channel League of Women Voters of Wyoming.

Videos of Forums held in Laramie

Laramie Conservation District and Hospital Board, 2020-09-24 (above)

Our Voter Guide for the Primary Election in Laramie, Albany County, and state-wide and federal offices is now available here in full, and at distribution points in Laramie.  The Boomerang will print it on August 2nd.

The League of Women Voters does not confirm the accuracy of candidate statements before compiling the Voter Guide.

Candidate forums for the Primary Election were held in July and into August of 2020, and recordings can be found on the YouTube channel League of Women Voters of Wyoming.

Number of Voters and Percentage Turnout in Wyoming Elections

US News: States with the highest turnouts

On the anniversary of the visit of Carrie Chapman Catt in 1919, the Laramie League held a meeting to hear voting methods background and explanation from Matthew Link, followed by votes taken under five different methods, and a discussion of the results. See the February 2020 video here and the November 2019 video here.

The 65th Wyoming State Legislature has begun its budget session. Sessions are recorded and available on the LSO site above.

From our lobbyist onsite in Cheyenne:

Our Voter Guide for Laramie, Albany County, and state-wide and federal offices is now available here in full, and at distribution points in town.  The Boomerang will print it on October 21st.

The League of Women Voters does not confirm the accuracy of candidate statements before compiling the Voter Guide.

NEWS:  With the University of Wyoming and others, the League co-sponsored a forum for gubernatorial candidates held on October 25, 2018.  See the UW recording:
Gubernatorial Debate at UW

Forums across the State of Wyoming

Videos of Forums Held in Laramie

The Boomerang and the Laramie League of Women Voters are pleased to bring you this Voter Guide to statements by candidates who responded to our questionnaire.

All candidates were mailed three questions in a letter sent June 29 to the address of record provided when they filed for office. If an email was provided, a duplicate was sent there. The first question was the same for all candidates. All questions were developed by the League of Women Voters. Candidates had 100 words per question and a deadline. They also received reminders.

If over the 100-word limit the response was cut up from the bottom to the closest complete thought. The omission is indicated by three dots (. . .) at the end. If there are three dots within the body of the paragraph, the candidate wrote it that way. Statements published here are exactly as the candidate replied. Capitalization, punctuation, grammar and other potential errors were not corrected. Bulleted lists and separate paragraphs were changed to single paragraph style for responses to each question.

There is a preamble to each race in the Voter Guide, stating salary, term of office and other pertinent information. Voters should be aware that the 2018 primary ballot is especially lengthy because projects for the tax renewal are listed

All voters should take note of the very detailed list of projects to be accomplished with the proposed One Percent Specific-Purpose Tax. This is the only vote on this proposal—unlike the vote for candidates, it will not appear on the General Election ballot.

LARAMIE—The Wyoming League of Women Voters has drawn up a list of Principles of Campaign Integrity for the 2018 election season in Wyoming. They can serve as a guide for candidates and voters to determine that campaigns that are honest, open and factual.

Wyoming LWV believes campaigns for public office should be conducted in a way that enables voters to be fully and accurately informed about issues and candidates. The five Principles help achieve that goal.

"We hope these Principles define a standard for honest and fair campaigning, the best way to serve voters," Wyoming LWV President Susan Simpson, Laramie, said. "We invite candidates to endorse the principles, follow them, tell voters of their support, and demonstrate their use."

The League of Women Voters is a nonpartisan, grassroots organization that fosters a democracy where every person has the desire, the right, the knowledge, and the confidence to participate.

Names of candidates who support the principles are added to the LWVWY's Facebook page.

LWVWY to Secretary of State

State statute identifies county clerks as the election officials for their counties.  The County Clerks Association of Wyoming has several concerns about upcoming elections.  Issues are identified in the correspondence below.

May 7, 2017
Whereas the right to vote is fundamental to citizenship in these United States of America; ...
Read more >>>

May 3, 2015
WHEREAS, A total of 410 bills and resolutons were introduced to the 2015 General Session of the Wyoming State Legislature...
Read more >>>

Resolution: Use of Budget Footnotes

April 26, 2014
Whereas, Members of the Wyoming Legislature increasingly use footnote amendments to the budget bill to legislate, in lieu of using the full legislatie process for proposals...
Read more >>>

Resolution: Against Voter ID in Wyoming

April 29, 2013
CASPER – The League of Women Voters of Wyoming approved a resolution opposing any requirement for voters to present birth certificate or photo ID at the polls in order to cast their votes, characterizing such legislation as “an expensive solution in search of a problem”...
Read more >>>

April 29, 2013
WHEREAS, The League of Women Voters was founded to help democratize the right to vote and for the past 93 years has fought to ensure that elections are fair, free and accessible to all citizens...
Read more >>>

April 29, 2012
WHEREAS, the League of Women Voters of Wyoming advocates for open and accountable government as the foundation of a healthy democracy...
Read more >>>